He Loves Her, But She's Abusive 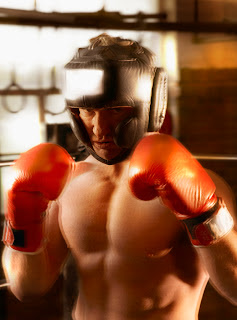 I don't really want to talk to my friends about this problem because it's kind of embarrassing.

The girl that I'm dating I love very much. We get along really good. But when we fool around she can get really physical. I'm in pretty good shape. I'm about 5'7, I box, and I also help teach boxing courses at the gym.

Well, the girl I'm dating is a bit taller (5'11) and a little bit bigger than me. Not fat, just thicker. I'm only about 145 and she's about 160. Maybe I'm saying all of this to justify my question so it doesn't look so dumb.

When we fool around, I can tell she's a bit stronger than I am. That alone kind of bothers me. But it is what it is. I have a pretty small waist and lean muscle while she has pretty big hips and bigger leg muscles.

This wouldn't be that big of a deal if she didn't get too physical. It's like she enjoys trying to hurt me.

Like if I'm on top she'll wrap her legs around really tight at times. I tell her to stop. But sometimes she'll actually get mad and want to stop. But I don't know what else to do. I can't even catch a deep breath and it feels like my ribs are going to crack in. I'm really not trying to exaggerate this. But it's not any fun for me. And it's nothing I can talk to my friends about. They would think I was a ......... a really weak guy.

She gets mad if I ask her to please me "down there". But I do that like 10 times to her 1 time she ever does it for me. Many times she'll make us stop fooling around completely.

Again, I'm not exaggerating about this. And, to make matters worse she has me lay on my back with her straddling over my face. Opposed to her laying on her back. But then she grinds so hard. Sometimes pushing down so hard that I can't catch a breath. THEN she'll get upset at me for "squirming" too much!!

When we are not fooling around it's GREAT. That's so odd to say. You'd think that I would like to fool around with her. I do and I would more. But it seems that the longer we've been together the more this element has been coming up.

Then there's the embarrassing factor. I want to be a boxer. I don't need to think I'm the toughest guy in the world. I'm clearly not. I can live with her being physically stronger. But when she's in the mood, and in that particular mood I get intimidated.

I would never hit her. Never ever ever. But, she's squeezed my ribs so hard at times that I have had to miss sparring. I'll even tell her before fooling around that I have sparring over the next couple of weeks (I can make okay $$ being a sparring partner). There have already been 2 times when I couldn't do that because of her acting like Kathleen Turner in War of the Roses

Is there any chance she'll lose interest in doing this/acting this way? Is she trying to show me that she's in charge when we fool around? Should I end the relationship? But if I do that, I could see her telling people about her hurting me and me being weak, not able to 'handle' her. That would be embarrassing.

Before I give you my opinion (you don't sound like a weak guy, for one thing), here's what the website of the National Domestic Violence Hotline has to say:

"Abuse is a pattern of coercive control that one person exercises over another. Battering is a behavior that physically harms, arouses fear, prevents a partner from doing what they wish or forces them to behave in ways they do not want.

Battering includes the use of physical and sexual violence, threats and intimidation, emotional abuse and economic deprivation.

Note the bit in the third paragraph about gender. It's a myth to think that only men are capable of abuse in relationships. Women are more than capable of it, too, whether it's physical or emotional (but it's underreported because a lot of men fear being perceived as weak). If a woman had written to me about a man rendering her unable to work, I would tell her to run for her life.

As I said before, you don't sound like a weak guy. At all. You're hanging out with boxers, but a cursory glance around a mall near you will prove you're stronger and fitter than 96% of the US population.

You sound like a decent guy who's in love with a woman who treats you well when you're not in the sack. But once you hit the sack, she transforms into a creature who gets upset at you for wanting to keep your airway unobstructed. She stops the action because it's all about her, and you're not doing things according to her demands.

You say this behavior is escalating. The woman has injured you to the point where you were unable to work. This is absolutely not okay.

Just because you're a man, it doesn't mean you should let her behavior slide. You already know it's not okay, or you wouldn't have written to me.

Here's the tricky thing: You say you love her. Things may be great between you most of the time, but does it really make up for the other nonsense? If you stay with her, what will your life look like 10 years from now? Will you have been able to achieve your goals as a boxer? Can you imagine being married to her?

You say that if you break if off, you could see her telling people about hurting you and that you're weak. What kind of person would say such things? And if she does say them, would they reflect on her or you?

I'm guessing it would not be you.

I don't know this woman, and I don't know what else she's capable of. If you decide to get out of the relationship, and she makes things dangerous for you, please make a call to the good people at the National Domestic Violence Hotline at 1-800-799-SAFE (7233).